A Question Concerning My Poems

The Arts: Poetry
One of my friends on FaceBook asked the following question after reading my poem, "A Famine of Tears" (also titled "Fames Lacrima").

Do most of your poems reflect the people you meet on the street?


My poems are not necessarily about specific individuals or specific encounters.  Each poem is a fusion of images, feelings, or encounters.  In fact "fusion" might not be the correct choice of word; let us say that they are more of a mosaic or an overlapping of real or imagined images, feelings, or encounters, so that no specific reality is intended, but a blending of emotions and images that leaves it up to the readers/hearers to recreate the particular reality they desire.   I also do not limit the term, "encounters" to physical meetings.  These can also include my encounters with the intangible aspects of life itself.  This particular poem was conceived in tears.  I was on a subway train one morning on my way to work in New York City, when all of a sudden I started to cry.  Not wanting to be seen crying by the other passengers around me, I turned to face one of the side doors, looking out into the darkness of the tunnel as the train sped along.   I could not think of anything in particular that precipitated the tears, but all I can recall was that I felt an overwhelming sadness.  I immediately whisked out my Droid mobile phone and began to write.  "Tears" seemed to be a dominant motif in this piece on account of my immediate experience of crying in the train, but the "little girl"?  I have no idea where that came from.  The "Spare some tears, spare some tears." was a variant of a homeless woman's words that I heard years ago.  She would walk through the train saying, "Spare some change, spare some change." 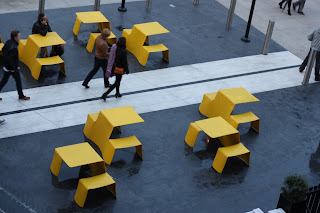 Posted by Ric Couchmam at 1:02:00 PM
Email ThisBlogThis!Share to TwitterShare to FacebookShare to Pinterest