Kill My Relatives and Friends?!! Are You Nuts?! 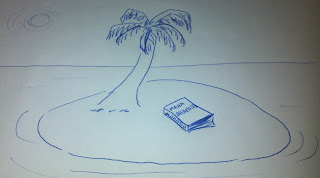 You know the question about which book you would take with you on a desert island.......Well, the book I would desire to have with me over every other book, is the Mahabharata.  Okay, I know, you expected me to choose one of the other sacred texts.  Sorry, it's the Mahabharata.  I guess you can say that the reason for the choice is the entertainment factor (It reads like a soap opera, mystery, drama, science fiction, you name it.) and, I might add, the depth factor.  It is that book from which the Hindu sacred text, the Bhagavad Gita is derived and which highlights and focuses on the conflict between two sets of cousins.  Actually, the Gita is essentially a conversation - a conversation between Krishna (a manifestation of God) and the warrior, Arjuna.  Arjuna's task is to kill his relatives, in effect acting as the instrument in which the world is to be purged of evil.  Arjuna was like "Hell no! No way am I gonna do that! Kill my own relatives and friends?!"  Well, he didn't actually say it that way :-)  The Gita is (among other things) Krishna's attempt to show Arjuna that even though he might kill his relatives, their souls could not be destroyed.

Posted by Ric Couchmam at 2:14:00 PM
Email ThisBlogThis!Share to TwitterShare to FacebookShare to Pinterest