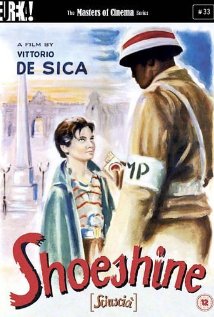 Foreign films first began to receive Honorary Oscar Awards in 1947.  It was not until 1956 that the Academy officially adopted the Academy Award for Best Foreign Film category.  Shoeshine, definitely one of my favorite foreign films,  received the first Honorary nod in 1947.  It is the story of two boys, in post War Italy, who share a similar hope and dream and whose friendship is severely put to the test.  This is a neo-realist film, which means, that it essentially focuses on the poor and working class, was filmed on location, and used non-professional actors.

Posted by Ric Couchmam at 3:15:00 PM
Email ThisBlogThis!Share to TwitterShare to FacebookShare to Pinterest