War in the Congo? Haven't Heard Of It. 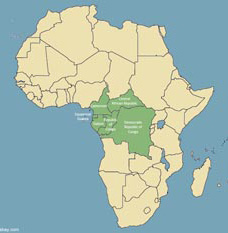 I don't know if you are aware of it. But did you know that there is a war going on in the Republic of Congo? Yea. That's the Congo - like in Africa. This war makes the recent Israeli-Palestinian skirmish and the current Syrian civil war look like a mere footnote.  In the last Congo war which ended in 2003, over 5 million people lost their lives, and most of them civilians.  It seems like they are headed in that direction again while the rest of the world and the major news agencies remain silent.  And what is more is that that country's democratically elected government is under siege by the so-called M-23 group - a militia group that uses children as child-soldiers and that is backed by Rwanda's president who is responsible for genocide in his own country. And while all this is happening, America remains silent.


In the bigger picture, it seems that this poverty ridden continent cannot catch a break. It has been decimated by the slave trade and European colonialism, and is now at risk for U.S. militarization, and also with that country, China, and the so-called BRICS nations salivating over its resources.

Posted by Ric Couchmam at 4:42:00 PM
Email ThisBlogThis!Share to TwitterShare to FacebookShare to Pinterest