Awed By the Holy 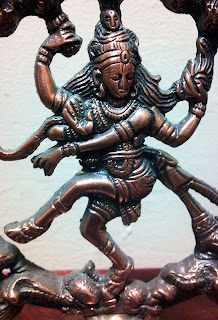 In my .last post in this category I talked about my experience as a child with the Islamic faith and how it made a lasting impression on me as a child.  In this post I wish to talk about my experience of the Hindu faith. The village in which I grew up was a wonderful mixture of Hindus, Muslims, and Christians. Given that mix I could not help but be influenced by those religion, especially given my sense of childlike awe of the Holy. With regard to the Hindu faith, I was exposed to all the rites, festivals, ceremonies (wedding and funeral), etc., participating (uninvited of course) in many of these, often showing up bare-feet, without shirt, and with only a pair of worn-out short kakhi pants that partially exposed my backside. My favorite celebrations were Pagwah and Diwali. With respect to the latter I would steal (I thought the gods would understand.) a few of our neighbors' lights to put on our own door steps so that my family's home could also get some blessing. In my child's mind Hinduism was associated with beautiful colors, peaceful music, and fragrant scents. It was a religion that appealed very much to my senses. Then there were the gods in those beautiful pictures - the one with the blue skin that fascinated the hell out of me (Krishna), the dreaded Kali, the one with the elephant head and trunk (Ganesha), the one with the face of a monkey (Hanuman), the other blue-skinned one with multiple arms (Vishnu), and of course my favorite, Shiva. Hinduism became, and still is, my favorite of the major religions, and its Mahabharata remains my favorite sacred text.

Posted by Ric Couchmam at 4:13:00 PM
Email ThisBlogThis!Share to TwitterShare to FacebookShare to Pinterest