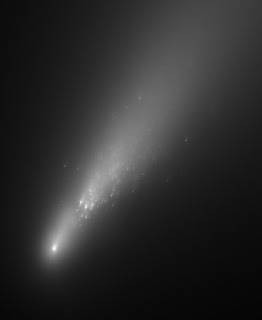 Another reprieve? The prediction (That P-Word again!) is that it is not likely to hit us. I am talking about 2011_AG5, the name given to the near-Earth Asteroid discovered on January 11, 2011. There were concerns that this approximately 460-feet-in-diameter rock might be on course to hit our planet in February of 2040, with the potential for damage up to 100 miles. Now it looks like we are in the clear, as NASA's prediction (yesterday) is that it will miss us by plenty. Talk about dodging a bullet - or in this case, an Asteroid.

[NASA image]
Posted by Ric Couchmam at 4:06:00 PM
Email ThisBlogThis!Share to TwitterShare to FacebookShare to Pinterest