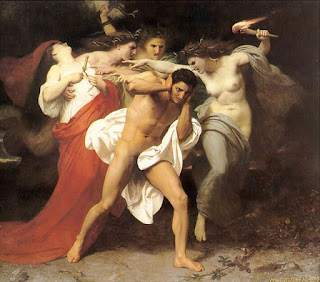 I have over-heard the remark, "You f@#%ing bi&*h!", many times, but sadly, on a number of occasions those words are spoken by a son or daughter to a mother.  Personally, I have always taken very seriously the command to honor and respect parents, especially mothers. In fact, I feel that it is a universal principle separate and apart from religious injunctions and that any son or daughter contravening that principle cannot live a blessed or successful life.  I have always told my own children that I would tolerate, excuse, and forgive many behavior, but any disrespect shown to their mother would never be accepted or tolerated. The Mother is sacred.  Note that Orestes, despite having what some might consider a good reason for killing his mother, Clytemnestra, was vigorously and relentlessly pursued by the Furies. The Furies will catch up with any individual who disrespects his or her mother, and the outcome will not be pleasant.

[The Remorse of Orestes (1862) William-Adolphe Bouguereau]


Posted by Ric Couchmam at 11:23:00 AM
Email ThisBlogThis!Share to TwitterShare to FacebookShare to Pinterest