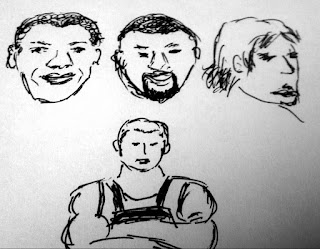 Now don't get me wrong; the first three have starred in some of my favorite movies, but I "hate" them.
I "hate" them because every time the first three are featured in some movie preview or the fourth is on his home improvement TV show, I have to hear how "hot" they are, or I have to be subjected to orgasmic sounds. You guys know what I am talking about. What's up with that, eh? Like last week we went on a movie date, and which movie did "they" pick? Freaking "Flight", starring you-know-who. And I had to sit through that piece of boredom (probably the only one of his movies I did not like), all the while knowing "they" were sitting there fawning over this stealer of women's hearts. Sheesh!  So you can imagine me in the theater while the movie is playing looking for all the faults and impediments, like his graying hair, his paunch, his...(I am drawing a blank here). But would you believe it!! "They" still find him hot. What's wrong with these people? Are they blind or something? So I went complaining to my firend, Brian, and he reminded me that after the movie we get to take them home. Now that's some consolation, but damn, we still have to hear those orgasmic sounds  or "He's so hot!"

Posted by Ric Couchmam at 5:50:00 PM
Email ThisBlogThis!Share to TwitterShare to FacebookShare to Pinterest