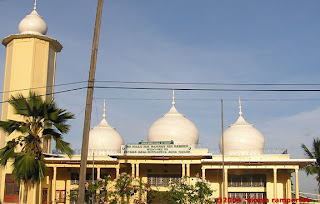 One of the most interesting experiences of my childhood was my father's enrolling me in the Islamic faith.  As such, I attended the Mosque (for prayers) and Maktab (learning Arabic) all decked out in my white kurta and taqiyah on weekdays, and on Sundays I attended Bible class and Church.  In other words, I was a Muslim during the week and a Christian on Sundays.  To this day I have no idea about my father's thoughts on this arrangement.  What was puzzling was that he himself was a proclaimed Marxist-Lenist and atheist.

As a child, the benevolence of Islam made a huge impression on me.  At the end of Ramadan, "free money" (as I called it then) would be distributed to the poor, and at the end of Hajj "free meat" (as I called it then) would also be distributed to the poor.  I would take my place seated on the ground among the poor, patiently awaiting my handout, to the bewilderment of the devotees at the mosque, for after all I should have been helping out with the distribution not getting distributed to myself.  I looked forward to those two days, as I would return home, to the great delight of my mother, loaded with coins and meat. Unfortunately, my childhood involvement in Islam came to an end because of the daily harassment I faced while on my way to the Mosque.  However, the memory of the wonderful experience and insight during my involvement with that faith will always stay with me.

[The photograph above is of the Mosque I attended as a child in Peter's Hall, Guyana.  It still looks the same after all these years.  Photograph courtesy of Rakesh Rampertab http://www.guyanaundersiege.com]

Posted by Ric Couchmam at 10:57:00 AM
Email ThisBlogThis!Share to TwitterShare to FacebookShare to Pinterest