"My Name Is Brad; They Call Me Jesus" 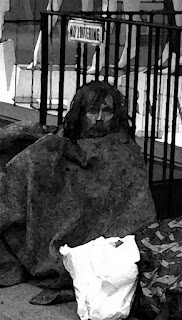 I had just gotten off the N train at 57th Street, the beginnings of a poem taking shape in my head, when I passed him. It was the day after Christmas. It was late evening and it was snowing - a mixture of rain and snow. He was sitting on the sidewalk with a brown blanket over his shoulders, but obviously still cold. He asked for some change, and I gave him the lot I had in my pocket and continued on my way. Remembering that I had a dollar in my wallet, I turned back and gave him that as well. Again I continued on my way. Then I realized that I did not even know his name. I was  already about seventy five yards away from him and wondered whether it was worth turning back to find out. I concluded that it was, for after all, in a recent conversation with my daughter, Kara, I had talked about how in giving "change" to people on the street we do not even bother to ask their names. So I turned back and asked him his name. "My name is Brad", he said, "but they call me Jesus."

I posted the above occurrence on my facebook page and profile and it received a lot of positive response from a lot of kind, caring, and well-meaning people. Now Brad does look a bit like the ubiquitous, golden haired, bearded man usually identified as Jesus, but what struck me about what he said and about the response from my friends on facebook was the readiness to identify him as "Jesus" -  either because he looked like that individual or because of the notion that helping the poor was essentially like helping the Jesus of the new Testament (Matthew 25:40). I do not see the preceding identification as flattering in any way, for by so identifying Brad, we deny him his own individuality and identity. The poor already have everything taken away from them; we do not want to take away as well the one thing that they can hold on to - their sense of self, individuality, and personal identity. I do not want to help Jesus (no disrespect toward humankind's self-designated Savior intended here); he does not need our help. The hungry, homeless individual suffering out in the cold does.

I composed the following poem after the above experience:

Teardrop From A Broken Heart

Is that a tear I see,
Streaming its way
Down your bearded cheek,
Bearing in its wake
All your sorrows
Of a bitter yesterday?

And is that a broken heart I hear
Beating a somber melody
Of lonely grief and pain,
Yearning to burst forth
Of their sanguine prison
Not knowing about tomorrow?

And may I reach out a hand
To give you sweet solace,
To kiss your moist eyes,
To pronounce a kind word,
And to gently take from you
The afflictions that so grieve your heart?


Posted by Ric Couchmam at 4:05:00 PM
Email ThisBlogThis!Share to TwitterShare to FacebookShare to Pinterest