Once Occupying Our Minds, Now A Mere Memory 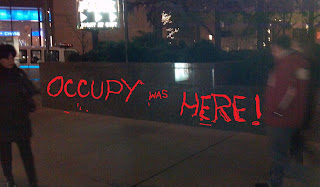 About three weeks ago there was a group of young adults sort of camping out at the corner of 61st Street and Broadway just outside the Trump International Hotel and Tower. They were protesters from the Occupy movement. They numbered no more than ten to twelve, seeming to consist of mostly young college students with a kind of unkempt look about them - unkempt in a trendy sort of way. They appeared to be protesting against the now infamous 1%. The trouble was that no one appeared to be taking notice of them or their cause, and they could very well have passed for some homeless youngsters camping out on the sidewalk. It was a sad sight for a movement that not too recently captured the imagination of the 99%. Last night as I walked by that corner on my way to the subway they were no longer there, succumbing no doubt to increasingly cold temperatures, boredom, the lack leadership, the pull of a comfortable middle class apartment some place, and disillusionment. The movement seems to have petered out into significance, and only last mentioned in connection with hurricane Sandy, but now a mere memory.

Posted by Ric Couchmam at 11:02:00 AM
Email ThisBlogThis!Share to TwitterShare to FacebookShare to Pinterest