Stop! Turn Back! A Tedious Read Ahead. 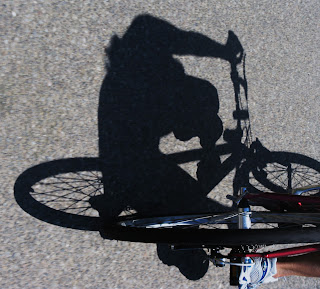 Instead of learning math in high school I spent most of my time getting sent out of class. In fact, on one occasion the teacher, Mr Ganpat, was so frustrated with me that he sent me out of the class to chase the cows that were in the school compound. It was not that I was a behavior problem or any such thing; it was just that I asked too many questions. Further, it was not that I was not good at math or that I hated it or any such thing, it was just that I learned differently. I wanted to know the "why" behind the rule or principle. For example when we were being taught the Pythagorean theorem I first wanted to know what Pythagorean meant and what theorem meant. Also, I wanted an explanation of the concept of square root. I knew what a square was, and I knew what a root (I was thinking plants) looked like, so what did those two have to do with a mathematical concept? I wanted to know the "why" behind the order of operations rather than to slavishly follow some PEMDAS rule. Then there was my favorite one - How the multiplication of two negative numbers results in a positive number. My teachers could only give that to me as a rule, but they could not explain why it was so. To this day, I have asked many math teachers to provide the explanation but no one seems to be able to do so. My view is that the individual or individuals who came up with those rules arrived at those principles through thought, and I wanted to be able to follow that thought process to see how they arrived at the rule or principle. Is that too much to ask?

And so the field of  Mathematics could not help me, so I turned to Philosophy to answer the question of why two negative numbers when multiplied results in a positive number. The key idea that helped my understanding of this rule is the notion that "every idea implies its opposite" - a basic principle recognized by Hegel to help him to conclude that "the Real is Rational". So the following is how I answered (philosophically) the question I first asked my Math teacher in high school. I have set it up in the structure of a lesson plan. Enjoy or Endure ☺

Purpose:
To understand how the multiplication of two negative numbers results in a positive product

Some Presuppositions:
1.  That every idea implies its opposite
2.  That the concept number is different from the thing numbered

Note that neither the idea nor its opposite can exist without the other. In a sense they exist for each other.

2.  The number 4 is not the same as 4 apples. The essence of apple is not number but something else; however, the essence of number is quantity.  If you remove (eat for example) an apple nothing remains; if you remove (set aside) a number, its opposite remains.

(Now I understand how Mathematics is a pure science. It arena is the realm of thought - of essences.)

Demonstration of how two negative numbers when multiplied produce a positive number, such as 4 x 4 = 16

2.  Now let us look at -4 times -4 or
-4 x -4 or the appearance of -4 negative four times.  Now, please note that the number on the right is called the multiplier. Keep an eye on that number, for in our demonstration it is critical.

In this particular case of -4 x -4 I suggest that we look at the multiplier as different from the number multiplied. In other words, let's see it as removing or taking away the multiplee four times.

Now keep in mind that every idea implies its opposite and that when you "remove" an idea that the opposite of that idea remains. Such as if there is no hard then there is soft, or if there is no negative there is positive.

This is starting to tire me out! I guess you must be tired out too (assuming you got this far). ☺

Posted by Ric Couchmam at 11:20:00 AM
Email ThisBlogThis!Share to TwitterShare to FacebookShare to Pinterest