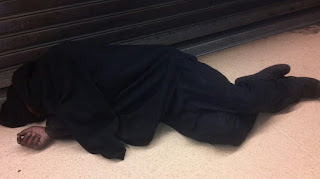 There is something seriously wrong in a society in which some of its citizens are left with no recourse but to live on the streets and to beg or to rummage through garbage for their daily sustenance.  And this is even more stark since we claim to be moral and civilized. There was a time when those individuals had a "face". They were specific individuals who lived outside our houses and whose meals were set aside by our mothers and we were sent to give it to them. Today we have stripped them of their humanity and have given them the nomenclature - the homeless. When we see one, he or she is a "homeless". We do not even bother to ask his or her name. And why should we? To humanize them is to be responsible and thus feel a sense of guilt; to depersonalize them is to absolve ourselves from guilt and responsibility.

Posted by Ric Couchmam at 11:23:00 AM
Email ThisBlogThis!Share to TwitterShare to FacebookShare to Pinterest