A Capitalism Without Profit As Its Goal!? 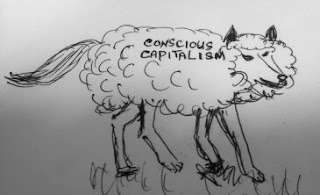 Not so long ago I was shopping in Whole Foods at Columbus Circle, and I noticed a sign which said, "Conscious Capitalism". I became immediately curious, and upon closer inspection realized it was the title of a book written by Whole Foods CEO, John Mackey. My mind then got into overdrive to try to make sense of the concept of conscious capitalism. I wondered whether it was making reference to a type of capitalism of awareness or mindfulness. I tried to imagine conscious or mindful profit-making but was coming up blank. On further investigation, I found out that Conscious Capitalism was supposed to be some sort of benevolent saving-the-world capitalism, more particularly having in view healthy eating for all the inhabitants of our planet. The author insists that his brand of capitalism does not have making profit as its goal but a bringing about a healthy planet in which every individual eats healthily.

Now I have no doubt that the author is a good man with laudable and commendable ideals, but in its very nature capitalism is not benevolent or sympathetic or concerned about the plight of individuals. At its core, capitalism is about making profit. Dispassionate profit-making is its essence, and it is so without sentiment. Of course the author does not see things that way as far as conscious capitalism is concerned. In his brand of capitalism profit-making is simply the means to a greater end, with that end being to bring about a planet of healthy-eating inhabitants. Well that sounds all well and good, but I do not see Whole Foods stores in depressed neighborhoods; they are to be found mostly in affluent or middle-class neighborhoods. I would think that if the goal of Whole Foods is to promote healthy eating to all, it would start with those who need it the most or those who cannot afford to eat healthily. In fact, Whole Foods' prices are more on the expensive side, making its products out of reach of those with less means.

So what conscious capitalism offers is nothing more than a wolf in sheep's clothing. And just as a wolf will always be a wolf and not grandma or a sheep, capitalism will always be capitalism, with its purpose the acquisition of profit by any means necessary and at the lowest possible cost. That is simply what it is in essence, and I accept it and cast no judgement on it. But please do not repackage it as something it is not.

Posted by Ric Couchmam at 4:44:00 PM
Email ThisBlogThis!Share to TwitterShare to FacebookShare to Pinterest