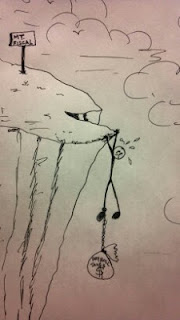 Okay, so President Obama and the U.S. Congress were able to avert the so-called Fiscal Cliff with the Senate's passing of its bill two weeks ago. Well that's all well and good; but guess what? I received my first bi-weekly paycheck for the new year, and I noticed that it was just over fifty dollars less than that which I received in the past. Then I was told that that was the result of the payroll tax being put back into place as one of the ways to deal with the deficit. So, in effect, the Fiscal Cliff did not go away - at least not for me. That fifty plus dollars cut in my paycheck has left me hanging off it. Such a cut for the wealthy would not hurt them in the least. But it certainly does hurt me and others like me. Not fair! Not fair at all!

[Artwork by Ric Couchman]
Posted by Ric Couchmam at 5:30:00 PM
Email ThisBlogThis!Share to TwitterShare to FacebookShare to Pinterest