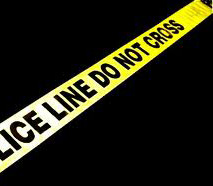 Parenting can be overwhelming at times, but it can also be lots of fun. One time my two teenage daughters had an argument between them, with the argument devolving into their hitting each other. Of course the latter response was absolutely unacceptable, and I reminded them of that very sternly, following which they were required to apologize to each other. The fun part was the consequence I put in place; that's where I got creative. They each sleep in separate rooms that adjoin each other. I had my older daughter pack everything she would need for a week in a bag, then I placed several strips of yellow "do not cross" tape across the door of her room and told her that she was going to be staying in her younger sister's room for a week. At the time neither of them was particularly pleased with this arrangement. For the first few days neither was talking to the other, but as the week progressed I could hear occasional giggles coming from the room. By the end of week they were having so much fun together that they wanted to continue staying together in the same room  a little longer. I did not allow it, but I certainly achieved my objective, and the point was certainly not lost on them. These two young women continue to be the best of friends.

Posted by Ric Couchmam at 5:06:00 PM
Email ThisBlogThis!Share to TwitterShare to FacebookShare to Pinterest