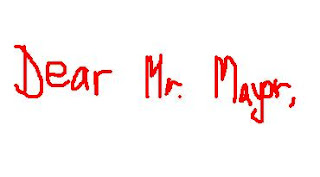 My two daughters again. This time they were ages six and eight. Another episode of hitting each other. After pulling them apart, I sat them down and got on the phone. I told them that I was about to call the Mayor (of New York City that is, Mr. David Dinkins at the time) to let him know that my two daughters were fighting each other. I "spoke" to the Mayor in their presence (on the phone).  He "told" me to tell them that if they continued to fight that he would have to separate them. He also "told" me to tell them that they had to write him a letter asking him not to take them away from each other and to promise him that they will not fight each other again. After I "got off the phone" with the Mayor, I shared with them that which he "told" me. They immediately set about frantically drafting their letters which I promised I would mail to the Mayor. Day after day they would ask whether I had heard from the Mayor. After about two weeks, I told them that I had in fact heard from him and that he had said that since they seemed really sincere in their letters that he would not separate them. We have those letters to this day.

Posted by Ric Couchmam at 2:43:00 PM
Email ThisBlogThis!Share to TwitterShare to FacebookShare to Pinterest