Not Another Military Intervention! 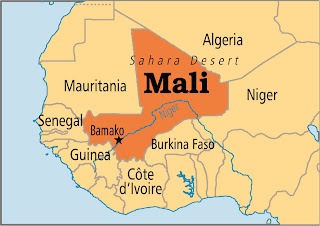 Yes! This time in Mali, a country in north west Africa, with France taking its turn at military intervention by a western power (under the pretense of combating extremism)  in a so-called third world country. It seems as if some things never change, and that the old colonial masters find it hard to give up their desire for control in resource-rich countries in Africa and elsewhere. Mali gained its independence from its colonial "Master", France, in 1960, enjoyed relative peace for a while with a democratically elected government and then was sent back into a state of turmoil for about forty years on account of a coup in 1968. In 1992 it began to enjoy some relative political stability until a coup in March 2012 set it back considerably. The Captain who lead the military coup claimed that he was taking over the government because of its poor response to the rebellion in the north of the country. The West's response to the illegitimate government that was set in place (and that is still in place) has been tepid to say the least. The rebel Tuaregs in the north of the country (considered Islamic extremists by France and its allies) are seeking to establish their own autonomy from the south. France, under the guise of protecting democracy and obviously with neo-imperialist designs, claims that it is responding to the cry for help from Mali's government - an illegitimate government at that.

Posted by Ric Couchmam at 5:39:00 PM
Email ThisBlogThis!Share to TwitterShare to FacebookShare to Pinterest