Out of the Fast Lane: A Greyhound's Story 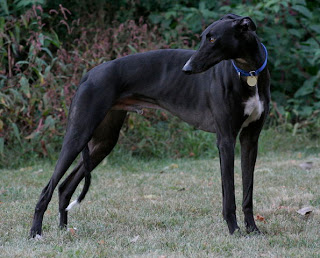 In 1990 I saw a documentary on PBS about the treatment of Greyhounds in the U.S.A. After seeing that documentary, I resolved to adopt a greyhound once I was in a position to do so. That opportunity came in 2007 when I adopted a three-year old racer named Thunder. Thunder began his racing career in Birmingham, Alabama in November 2005 and ran his last race on August 23, 2006. In all he ran a total of 58 races, placing 1st in seven. Repetitive poor showing and a broken hind leg were responsible for his early retirement.

Greyhound racing as we know it today began in 1919. While it might appear as a harmless sport, greyhound racing subject these racers to an extremely difficult life. They spend long hours in cramped, dark kennels, are deprived of normal social contact, rarely see or interact with their owners, are overworked, and are subject to frequent injuries (often fatal) during races. Every year thousands of young, healthy greyhounds are killed because of injuries, because they lack racing potential, or because they are no longer competitive.

Greyhounds make wonderful pets. They are loving very low-key and easy-going, are highly trainable, rarely bark, are pretty much low-maintenance, and are not aggressive. They are the consummate couch-potatoes. A half hour walk in the morning and a half hour walk in the evening (always on a leash) is all they need as far as daily exercise is concerned. If you are considering a adopting pet, a greyhound should certainly be at the top of your list.

[Photographic Art "Thunder" by Ric Couchman]
Posted by Ric Couchmam at 4:03:00 PM
Email ThisBlogThis!Share to TwitterShare to FacebookShare to Pinterest