The Death of Critical Thinking 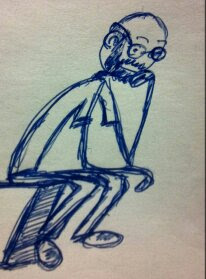 Sometimes I wonder why I bother. As a student and as an educator I have learned and have taught critical thinking.  It is a value that ensures our freedom, that we will be in subjugation to no principle, person, or ideology. Unfortunately, that value has been under assault and constantly being eroded by consumerism, mistaken notions of what it means to be successful, and the insatiable desire for profit and power on the part of some individuals and groups. The access to seemingly unlimited supply of  information (or misinformation) has not helped either. For the most part such information is accepted uncritically.

Educators talk about having as their objective developing critical thinking in students, but most still use the lecture approach as the primary means of instruction, with students seeing them as the key source of knowledge. Most students are still under the impression that the teacher is never wrong and that they know everything in their subject area. Sadly, what we are turning out from our educational institutions are not thinkers, but consumers. We are turning out individuals who fall easy prey to the propaganda of politicians and profiteers. We are turning out individuals who will vote for a presidential candidate because he looks "presidential". We are graduating individuals who will look at someone wearing a taqiyah and harbor suspicions that he is a terrorist.

Every where we turn we are being told what to do or what to buy. If we walk the streets, ride the bus, ride the subway, etc. we are constantly bombarded with signs telling us what action to perform or not to perform or what product to buy. When we get home the first thing most of us do is turn on the TV, from which we are inundated with messages seeking to influence us one way or the other. As such, we have no time to pause and to reflect, to think.

There are no models of debate or critical analysis presented in debates, talks, or discussions in the media. What we get are mere personal opinions or sideshows without any real presentation of propositions that are subjected to critical scrutiny. Assumptions are not rigorously tested; fallacious reasoning or arguments are not pointed out. Platitudes or flavorful oratory without substance is that which is valued, and the response, "That is my personal opinion.", is which is offered as the criterion for validation of thought. And what is worse, is that our justice system is asking jury members who know nothing of critical thinking to weigh and analyze evidence. Any people who lose the ability to think critically or who, having that ability, do not put it to use themselves, will be in danger of succumbing to dictators.

Posted by Ric Couchmam at 5:31:00 PM
Email ThisBlogThis!Share to TwitterShare to FacebookShare to Pinterest