The "Pawns" of Kashmir 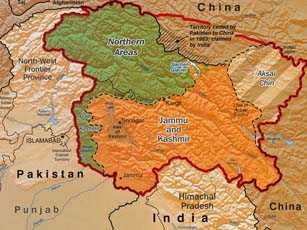 The exchange of gunfire this past Sunday between Pakistani and Indian troops along the disputed Kashmir border  has again put the issue of Kashmir in the spotlight. The Kashmir dispute (between India and Pakistan) is the oldest international conflict in the world, with the entire international community except India, recognizing this political dispute. The dispute came to a head with India's forcible occupation of Jammu and Kashmir in 1947, with reports, over the years, of numerous cases of rape, torture, killings, arrests, abuse, and disappearances by Indian troops. The territory is divided into two, with a third controlled by Pakistan and two-thirds (Jammu and Kashmir) controlled by India. Numerous military encampments dot the two occupied sections.

The plight of the people in Jammu and Kashmir does not get a lot of international media coverage since the conflict is seen as an internal matter between Pakistan and India. For their part, the Kashmires want independence and self-determination, and they continue to resist the occupation by India. The injustices and the suppression of their civil liberties continue. Pakistan itself is not without culpability, for it is using the grievances of the people of Kashmir to serve its own political interest. As such the people of Kashmir are mere pawns in the India-Pakistan conflict. The fact that most of the people of Kashmir are Muslims does not make them want to become a part of Pakistan. They want their independence. Both India and Pakistan ought to back off.

Posted by Ric Couchmam at 9:58:00 AM
Email ThisBlogThis!Share to TwitterShare to FacebookShare to Pinterest