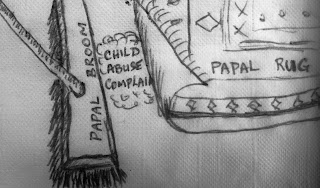 Good riddance, Ratzinger! Yes! There! I said it! Sure glad to see the back of Joseph Ratzinger (alias Pope Benedict XVI). Didn't even feel he was the right choice for the position of Pope in the first place. Now before  you go blasting me, I am Catholic (among other religious affiliations of course - hindu, evangelical, muslim, buddhist, judaic, wayside...), born, raised, and catechized, meaning I was baptized, first communed, confirmed, altar-boy(ed) and all that stuff. The guy didn't even have the decency to wait until after the Lenten season to resign. And I don't want to hear about his deteriorating strength and old age and about the mental demands of the Papacy as the reasons for his resignation. Gimme a break! The Vicar of Christ throwing in the towel? That's almost like God packing it in! No backbone! And even if the rumor were true that some undisclosed nation declared its intent to arrest him for crimes against humanity.....Hey, this would be a big opportunity for him to go down like the historical Jesus. Public trial with shouts of "Crucify him! Crucify him!", punished, and then later canonized. Anyway, I am getting carried away here. But back to my concern.... I am glad to see him go because of his administrative complicity in child abuse by members of the clergy, sweeping stuff under the administrative rug instead of responding justly to the numerous complaints brought against child-abusing priests. And I am also glad to see him go because he was largely responsible for crushing liberation theology, declaring that it constituted a fundamental threat to the faith of the Church. This Pope was never on the side of the oppressed and the poor, so, like I said, "Good riddance!" I hope his replacement is going to do some real house cleaning, that he will strive for the ideals of Vatican II. It won't hurt also if his replacement were younger.

Posted by Ric Couchmam at 2:14:00 PM
Email ThisBlogThis!Share to TwitterShare to FacebookShare to Pinterest