Job Cuts After Record Profits! Are You Kidding Me? 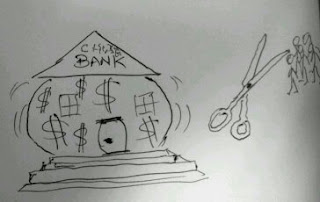 Please, someone, help me to understand this! It was announced a few days ago that JP Morgan Chase will be cutting up to 4,000 jobs in 2013 and up to 15,000 jobs by 2014. Now that is all well and good! However, I understand that the year 2012 was a good year for America's largest bank, its best year ever. It reported record profits for both the third and fourth quarters. It is awash in and rolling in doe! Rolling in dough from government bailout money it received during the credit crisis and rolling in dough from big earnings it brought in since the crisis. And so, to cut jobs after making such recording making profits as it did last year does not make sense to me. One would think that it makes more sense to cut jobs when things are not going well rather than when things are going well. Such axemanship as JP Morgan Chase is intending to exercise is not the sign of an economy on the mend. Who do "those so-called experts on the economy" think they are fooling when they tell us that stocks are hovering near a five-year high, when they tell us about the rebound in housing from the pace of home price picking up, and when they tell us about consumers feeling more upbeat? Call me a skeptic if you wish. What JP Morgan Chase intends is not a tightening of its belt, so to speak, to prepare for hard times, but a positioning for maximizing profits even more. And if it can do so by eliminating 15,000 humans from its workforce, then why not. They are expendable anyway.

Posted by Ric Couchmam at 4:18:00 PM
Email ThisBlogThis!Share to TwitterShare to FacebookShare to Pinterest