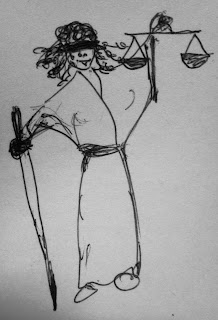 The impartiality of justice seems to be the exception rather than the rule. At least that is how it appears to me. A friend of mine and his wife bought a nice apartment two years ago. They are a wonderful young couple, full of life and looking to transform their dream into a burgeoning reality. Because of a new job placement, the couple had to relocate to another state, causing them to rent out their recently bought apartment. The screening process indicated that the prospective tenant was a respectable and responsible person. In fact, he was a prominent figure in the community, with more than the means to pay the required monthly rent. He was the perfect tenant.

Things went well for a few months, but then the tenant started to default on his rent. The situation continued for several more months, culminating in my friend's taking the delinquent tenant to court. You would think that things would go smoothly and that the situation would be resolved to the satisfaction of my friend. Unfortunately that was not the case. The tenant still lives in the house and has been able to use his connections to cause things to be dragged along. In the meanwhile, my friend and his wife are left not knowing what to do and not knowing where to turn. Where is justice when you need it? It is supposed to be fast, fair, and free. But maybe I have it wrong, for it has not turned up at my friend's doorstep. He has yet to see it put in its appearance. He has been severely inconvenienced by this entire affair, and he is paying through his nose to have the matter fairly adjudicated, but seemingly without success.

It would appear then that justice, far from being impartial, favors the privileged and the prosperous. If such is the case, what hope is there for those of us who are neither privileged nor prosperous. Maybe she needs to take off the blindfold so that she is not led astray by those who would subvert justice. Further, if she takes off the blindfold she would be able to see clearly those who really need her intervention and would not be impeded by her inability to find her way to them on account of the blindfold. Find your way to my friend, and to those who need you, Justice. I implore you.

Posted by Ric Couchmam at 6:20:00 PM
Email ThisBlogThis!Share to TwitterShare to FacebookShare to Pinterest