Most Violent City: Aftermath of a Coup 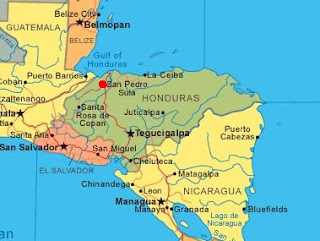 I read a sports article today which was headlined "US Begins Its World Cup Quest in the Most Violent City in the World" [click here for link]. That city, San Pedro Sula, the second largest in Honduras, was given the designation by the U.S. State Department and by Humanitarian Groups. This country's precipitous descent into violence follows a bloody military coup which took place in on June 28, 2009, displacing the democratically elected President Manuel Zelaya. The homicide rate and drug related violence continue to escalate. Honduras, after about 20 years of authoritarian rule by military regimes, returned to civilian rule in 1981, striving, up until 2009 to maintain a fledgling and fragile democracy. Then the 2009 coup derailed all the gains made in that direction, bringing with it an increase in organized and common crime, an increase in political murders, kidnapping, and torture, increased drug trafficking, and increased militarization. The 2009 coup (and the fraudulent elections that followed), while condemned by the U.N., the European Union and the Organization of American States, was allowed to consolidate its power. As a logically corollary, the rule of law, governance, and respect for the social contract were all undermined, paving the way for the gradual disintegration of the Honduran society. One has to wonder, though, whether the United States', because of its luke-warm, non-committal, and weak response to the coup (while most other nations were strongly condemning it), deserves some share of the responsibility for occurrences after the coup.

Posted by Ric Couchmam at 4:24:00 PM
Email ThisBlogThis!Share to TwitterShare to FacebookShare to Pinterest