What Does This Have To Do With American History? 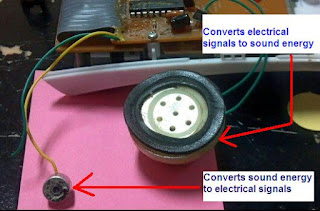 The course of study is American History. The period under consideration is the 1870s. One of the students gives his report on Alexander Graham Bell, the man responsible, during that decade, for one of the two key inventions in America - the invention of the first practical telephone. The teacher asks the students whether the student's report stirred within them any questions. One student wants to know how the telephone works. The teacher asks him to take a shot at guessing at the answer and to attempt to illustrate his answer on the white board. The student draws two telephone receivers connected by a line and two stick figure individuals next to each receiver. The student explains that one person speaks into receiver A and that the sound passed through the line (wire) to receiver B. The only problem is: how can sound (sound waves - as offered by another student) be transmitted through a telephone line from one point to another?
\
The next day, the teacher brings in an old telephone receiver which she takes apart to help provide a more visual reference. The students all agree that what goes into the mouth-piece is sound energy (or sound waves), but that which passes through the wire is electricity (or some type of electric signal). The question: How to explain the electrical signal that passes through the phone line when that which goes in is sound energy? After several moments of silence, blank stares, half-hearted attempts at answering, and puzzled expressions, one student offered that some type of spare must be responsible for the sound energy becoming electrical signals. Bingo! Sound energy converted into electrical signals which are then converted back to sound energy on arrival at the receiving end! Then one of the students asks: What does this have to do with American History? Another student responds: If Mr. Bell had not attempted to find out how to make sound pass through a telephone wire we would not be studying him.

Posted by Ric Couchmam at 12:30:00 PM
Email ThisBlogThis!Share to TwitterShare to FacebookShare to Pinterest