A Must-Read For Every High School Student 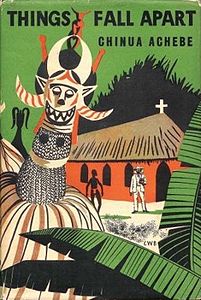 The world mourns the loss of Chinua Achebe, Nigerian novelist and poet, best remembered for his novel, Things Fall Apart. I do not know if it is still the case today, but this novel used to be one of the key works studied in high school literature classes. It was one of the required readings when I taught an upper-level English class at RLS in the 1990s. This book offers the critical thinking student the opportunity to explore a variety of themes: the imposition of Western values on a recipient culture and the concomitant dissolution of that culture, the logical corollary of following a path of revenge/violence, the pitfalls of adhering to values of so-called "manhood", and the dangers of maintaining an unswerving allegiance to tradition. Okonkwo, the main character in the novel, is a self-made man of distinction who refuses to be like his weak father. He chooses to participate in the sanctioned killing of a young boy entrusted to his care and for whom he has developed some affection. It is following this event that his world begins a precipitous downward spiral (paralleling that of his village with the coming of the white man), culminating in his own suicide and loss of status. This book, numbered among the top 100 books in the world, ought to maintain its status as one of the key works of literature studied in high school. Thanks, Mr. Achebe for giving to the world this important work. Rest in peace.

Posted by Ric Couchmam at 1:36:00 PM
Email ThisBlogThis!Share to TwitterShare to FacebookShare to Pinterest