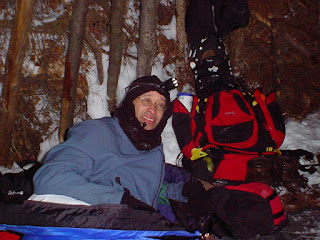 We figured that it would be a piece of cake. Tackling the rugged terrain of Calvin Coolidge State Forest in Vermont. In the dead of winter that is. After all, we had done this countless times before, backpacking during many winter seasons in the Catskill, the Adirondack, on the Appalachian Trail, and on trails and mountains elsewhere in the Eastern United States. This one would be no different, and we were ready for business, Joe and I. We drove up early on Friday so that we could spend the night at Joe's friend, Todd. Todd had recently finished building, single-handedly, a wonderfully huge house just below one of the mountains of the state forest. We had a wonderful dinner, tucked in for the night, and were ready to hit the trail at first light the next day. 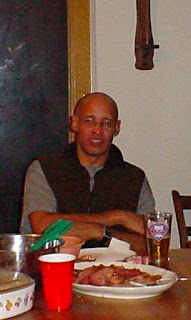 We should have known that it was going to be a challenge, for we had hardly started up-trail when already we found ourselves post-holing, even though we were wearing snow-shoes. So along we plodded in the thick snow, carrying our light-weight winter gear and enjoying the stillness of the morning. We kept a steady pace until we eventually came to the top of the ridge. The trail at the top was poorly marked and finding the trail-markers was also very difficult because of the snowy conditions. Soon we found ourselves at what appeared to be the side of the ridge, with a steep drop below to our right. The going along the trail was okay, but we noticed that we were fast running out of flat ground upon which to walk. It seemed as if we were hugging the side of the ridge and had run out of trail. We decided to tie a rope between us just in case, for the conditions seemed to be getting worse and worse. 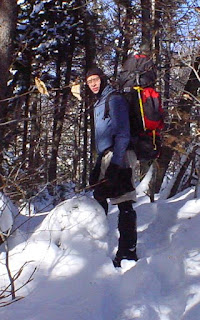 Joe was in front of me when all of a sudden I heard him cry out. The next thing I noticed was that he was sliding down the side of the mountain. It all happened very quickly. I expected to be falling with him  when suddenly the rope became taut. Jutting out from the side of the mountain was a small sapling; it was midway between Joe and me when he fell. So there we were, me about eight feet from the sapling, with the rope around my waste and extended around it, and Joe hanging down another eight feet from the sapling.  Slowly, I was able to pull him back up to where I was on the side of the mountain. We were quite shaken up by the experience, but we knew that that sapling had saved our lives. We then realized that we had run out of trail and that there was no going forward for us, and when we looked behind we certainly had no desire of returning back way the way we had come. How we eventually got down that mountain is another story.

Photo 1: Settling in for the night after our harrowing experience earlier in the day
Photo 2: Friday night dinner at Todd's
Photo 3: Setting out on our adventure unaware of what was ahead of us

Posted by Ric Couchmam at 4:03:00 PM
Email ThisBlogThis!Share to TwitterShare to FacebookShare to Pinterest