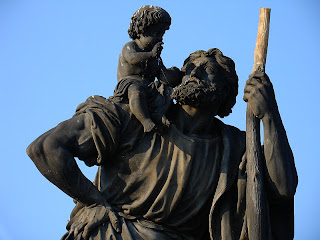 I guess she took me there out of a sense of desperation. Everything else she had tried was to no avail; they all failed. The visit to the dispensary a year before produced no good result, for someone forgot to tell the nurse at the station to sterilize the knife that was used to lance the abscess  A couple of stays in the hospital did not work either, though the up-side was that I was assured three square meals each day while I was there. The recommended poultices from the local herbalists (one or two of them known to "wok obeah") proved to be so irritating to the affected area that I was often driven to tears. I kept pulling them off, for I could not bear the irritation. Talking about tears...At night I could not sleep. The pain was unbearable. And of course, I thought that I was going to die. Oh, you cannot even begin to imagine the fear I experienced. I desperately did not want to go to hell. In the meanwhile my attendance at school suffered, bringing to the fore my other great fear - that I was going to lose ground in math and as a consequence lose my first-place standing in the class to my rival, Ramesh.

As I said, I believe that she took me there out of a sense of desperation. But why hadn't she thought of it before? Anyway, once we entered the Cathedral, I was overcome with awe, fear, wonder, and admiration. I was mesmerized by the silence, by the shear size of the place, by the stained-glass windows and art, by the statues whose faces and whose eyes said, "Don't be afraid." She had to pull me away so we could get to the matter at hand, for I had become frozen by the holiness of the place. We lit a candle after depositing a penny (the large brown one with the woman wearing a crown on her head) in a medium-sized polished box then knelt before the statue of a man with a child on his shoulder. She told me he was Saint Christopher and that he was very helpful to children. There was hope then. I might not have to go to that fiery place after all, and I could do without the excruciating pain at night. And so I began, "Dear Saint Christopher...."

Posted by Ric Couchmam at 2:43:00 PM
Email ThisBlogThis!Share to TwitterShare to FacebookShare to Pinterest