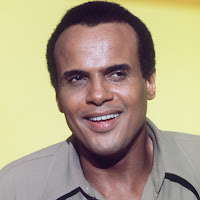 This past Thursday I attended the 2013 Amy Winehouse Foundation's Gala and Inspiration Awards at the Waldorf-Astoria in New York. It was a blast. The food was good, and the wine was good. I kid you not; I was there. You don't believe me? Ask, um.... No, I did not pay, can't afford it; my ticket was paid for by...Yea! That meant I was having dinner and sitting in the same room with celebrities including, Tony Bennett, Moe Kane (environmental activist), Jennifer Hudson (to see and hear her sing in person was quite a treat - and my God! What a fantastic voice!!), Sean Lennon, and Harry Belafonte. Harry Belafonte!? Yea, Harry Belafonte. Now I am not into celebrities and all that stuff - too old for that. Anyway, my mom loved Harry Belafonte. He was her favorite actor and singer. As I sat at my table and after hearing that he was present, I decided that I was going to go to his table and say, "Mr. Belafonte, I just want to say 'Hello."  I was already on my second  glass of wine so it was going to be easy. And after all, I could not leave without saying something to him. My mom, God rest her soul, would have none of it.

Well, to make a long piece of writing short, I went up to Mr. Belafonte's table and did as I had determined. He was a bit wary at first, but he quickly became more affable, asking about what I did, and eventually he shook my hand. I shot a parting, "Daylight come and me wan go home." at him (to which he smiled) and returned to my table. But it was later as he introduced his friend Mr.  Tony Bennett that I realized how compelling the man is. I was hanging on to his every word as he reminisced about his and Mr. Bennett's involvement in the civil rights movement of the 60s and about how things had changed at the Waldorf-Astoria, which before was a place in which blacks and other minorities could not stay, work, or perform. I came away from that event learning more of Ms. Amy Winehouse's magnanimity and generosity, about Mr. Tony Bennett's little-talked-about involvement in the civil rights movement, and, among other things, of the tremendous spirit of Mr. Belafonte. What an evening!
Posted by Ric Couchmam at 11:49:00 AM
Email ThisBlogThis!Share to TwitterShare to FacebookShare to Pinterest