The Theory of Everything Else Except Gravity


So apparently, it has been confirmed that that the Higgs Boson was indeed found by the Large Hadron Collider at CERN. That led me to thinking about a number of questions, one of which included the age-old rhetorical one, "Who gives a sh*t?"   But if you have ever asked yourself the question: "What is the Universe made of?" The so-called Standard Model Equation written on the stone below is the particle physicist's best attempt to provide an answer: 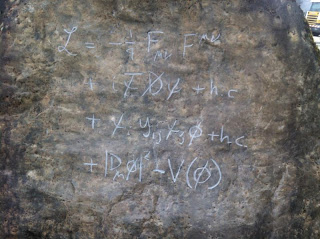 I do not understand squat of what that equation is saying; it is like fricking Sanskrit (not Greek 'cause I know that language) to me. Nonetheless, I can break some of it down for you as follows:

2.  The Universe is the interplay between matter and energy. The Standard Model equation presents the interaction between energy and the sub-atomic particles (17 in all, with the Higgs Boson providing the 17th particle to complete the puzzle) that form the basis of matter. Acting upon these particles are the four fundamental forces of nature, one of which (Gravity) we know nothing about.

But like I said, "Who gives a sh*t?" We have got every day living to take care of.

Posted by Ric Couchmam at 3:17:00 PM
Email ThisBlogThis!Share to TwitterShare to FacebookShare to Pinterest