What the Frack?! No Fracking Way! 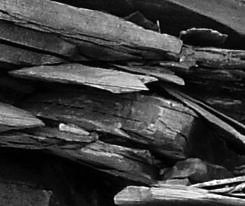 Last year, in his state of the union address, President Obama said that America has a supply of natural gas that can last nearly a hundred years and that his administration would do every thing possible to remove that energy safely. Easier said than done. The natural gas the President spoke of is found trapped within shale  formations. Shale is a type of rock composed of clay-like, fine-grained sediments. The gas deposit (referred to as shale gas) found among these rocks is extracted through a process called horizontal hydraulic fracturing (or fracking), and it is a process which poses a serious threat to the environment and to the health of nearby communities. In order to extract shale gas, millions of gallons of water, sand, and chemicals are injected under very high pressure into a well. The intense pressure fractures the shale rocks, opening fissures and causing the gas to flow freely and easily. A 2005 energy bill signed by President Bush exempted drilling companies from disclosing the chemicals used during the fracking process. The logical corollary of this exemption is that those companies are in a sense under no obligation to maintain any commitment to the Safe Drinking Water Act of 1974. The pollutants from the chemicals used in the fracking process threaten nearby water tables, and the highly toxic waste-water, once evaporated, causes volatile organic compounds to be released into the atmosphere. In addition, fracking destabilizes the bedrock and can produce sinkholes, soil slumping, and other geologic problems related to ground-shifting, thus creating unsuitable conditions for building structures. The grave environmental and health concerns associated with fracking require that we raise our voices loudly in protest against this process.


Posted by Ric Couchmam at 5:50:00 PM
Email ThisBlogThis!Share to TwitterShare to FacebookShare to Pinterest