Will All the Other Belligerents Please Stand Up 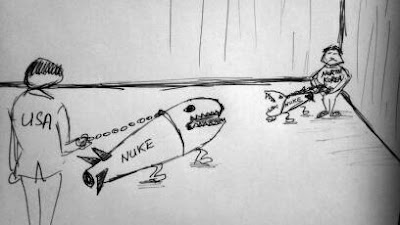 Last Thursday, President Obama called on North Korea to bring to an end what he termed its "belligerent approach." Say what!!! There are "War Games" currently taking place just across the North Korean border involving thousands of troops, naval vessels, stealth bombers, and artillery deployment. Of course, these joint US-South Korea military exercises are being called war games, but for North Korea there is nothing playful about these exercises. The reality is that it feels threatened. And what I find hard to believe is that the US, having publicly declared that North Korea is capable of launching a nuke, is still rattling the saber on North Korea's doorstep. This is a dangerous game. What I also cannot understand is how North Korea is the only one belligerent? Pakistan and India are starting to act up again, with India earlier this year warning of nuclear threat from Pakistan, and no one is calling for sanctions against either of those two countries. Moreover, of all the countries having nuclear weapons and conducting tests, North Korea has conducted the fewest nuclear tests and has not invaded another country or engaged in a war since the Korean war. All the other nuclear powers have engaged in a war of some sort since the Korean war. But that does not take North Korea off the hook. Issuing threats about its intent to use nuclear weapons is highly irresponsible and downright ludicrous, not to mention stupid. Get a grip of yourself, North Korea! And this posturing like childish schoolboys between the US and North Korea  must stop. Enough already! And talking about belligerent? The following are the countries that have nuclear weapons and the nuclear missile tests they have conducte:

Get rid of all the damn nuclear weapons, please, before someone does something stupid!


Posted by Ric Couchmam at 4:23:00 PM
Email ThisBlogThis!Share to TwitterShare to FacebookShare to Pinterest