Keystone XL Pipeline: To Approve or Not 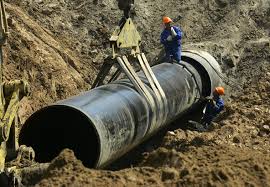 A big decision confronts President Obama this summer or fall - whether or not to approve the Keystone XL Pipeline. The Keystone XL Pipeline is a 1,700 mile project that is intended to transport oil from Alberta, Canada to refineries on the Gulf Coast. While the lucrative profit from the construction of this pipeline is certainly humongous, the acquired profit pales in comparison to the environmental damage that would result, putting people and wildlife at risk from toxic oil spills, polluted water, and much more. This is one decision that President Obama wishes he does not have to make, but it is waiting right there on his desk. In a way, this decision will define his presidency. I hope that he will show some courage when the time comes and that he will do the right thing and not approve the pipeline, but then again, given his response to some other stuff I am far from hopeful.


Posted by Ric Couchmam at 4:52:00 PM
Email ThisBlogThis!Share to TwitterShare to FacebookShare to Pinterest