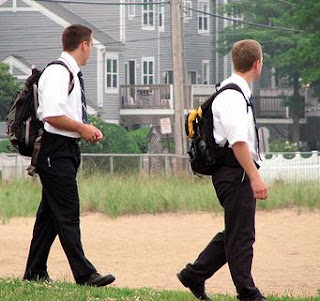 While I was pursuing theological studies on the beautiful island of Jamaica, two young Mormon Missionaries from Utah came to my house to share their faith and to win me over to Mormonism. They were Elders John Hampton and Mike Greenleaf.  I made it clear to them that I had no interest in converting to the Mormon faith, but that I would love for them to teach me all they could about Mormonism.  We agreed that they would  come to my home twice a week in the late afternoon for four weeks. They were somewhat taken aback by my request, for in a way it took them out of their game plan and took the control of their routine out of their hands. They could no longer follow their script, for I dictated the pace and direction of each meeting. In fact, I insisted on not referring to them as Elders, but on keeping things on a first name basis. At first they were very uncomfortable with the arrangement, but they soon got used to it.  I really desired to understand the fundamentals of their faith and had no interest in showing where they were in error or any such thing (for who knows what the true faith {if there is such a thing} really is), and I must say that I learned a lot about their system, the Book of Mormon, and much more.  I saw in those two young men my own youthful zeal of years past and believe that it was for that reason that I invited them into my home - to vicariously relive that experience through them.  In the end, I believe we formed some kind of a bond - the two young men and I - and by this time they had become more comfortable with me.  We parted, at the end or our eight sessions, with me much more knowledgeable about Mormonism.  And they? Well, who knows?


Posted by Ric Couchmam at 4:10:00 PM
Email ThisBlogThis!Share to TwitterShare to FacebookShare to Pinterest