The Strange Ways In Which Our Lives Intersect - Part II 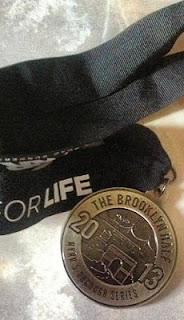 In a previous blog I wrote about agreeing to stand in for (at the time) a complete stranger in the Brooklyn Half Marathon on May 18, 2013. Well, I did run the race and, for someone who had not run more than six miles since last November, I performed extremely well. In fact, I felt very good throughout the entire race, starting out strong and maintaining a consistent pace all the way to the end. The theme of the race was "Run For Life", and indeed I was running for "Life" - for the life of Vince's brother Joe, who, as I indicated in Part I, had injured his spine in a fall, rendering him completely paralyzed. During the race I kept thinking of those two brothers and how our lives had converged. As I ran, I kept praying for Joe whose life had suddenly been turned upside down when he least expected it. I also kept thinking of how Life owes us nothing and how impervious it is to our feelings, wishes, desires, achievements, happiness, pain, and sorrow. That all we can do is simply live to the  best of our abilities and hope for the best. But Joe is a fighter, for he began to experience sensation and movement again, and at last report he was able to walk a distance of 200 feet (using a walker) with minimal assistance.

Since the race, Vince and I met again. We met at a subway station where I returned the bib and also gave him the medal I received so he could give to his brother, Joe. So here we were two brothers and me - before now, I, a complete stranger to them and vice versa - but united on account of a spinal injury and the Brooklyn Half Marathon. The "Why?" of this intersecting of our lives completely unknown to us, but nevertheless, for me completely fulfilling. As I walked away from that second meeting with Vince and headed back to catch the train, I raised my eyes and asked, "What now?"

Posted by Ric Couchmam at 12:19:00 PM
Email ThisBlogThis!Share to TwitterShare to FacebookShare to Pinterest