A Nation of Warriors? 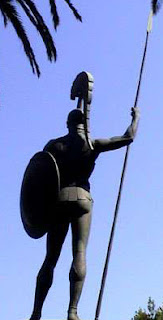 The denotative word for someone who fights as part of an organized contingent of combatants is "soldier", but the connotative word, "warrior", goes beyond the term soldier. In primitive cultures "Warrior" suggests far more than the simple "soldier". It is weightier, carries more depth of meaning, and is more romantic and idealistic. The warrior implies a hero figure, someone who is brave, honorable, fearless in the face of death, and puts leader and country before all else. The warrior lives for war. It is that which defines him. It is that by which his life has meaning; after he completes one war, he seeks out another, with the ultimate objective being the receipt of honor and glory. That honor and glory is achieved from killing - killing the enemy often with extreme cruelty. Literature through the ages aggrandized war and glorified the warrior. And in addition, it celebrated his acquisition of the spoils of war, which often included women. Warriors attained celebrity status, becoming an elite class in itself.  Such was the warrior culture of old, and it seems as if that is what we are returning to today. The term "warrior" is gradually creeping back into our vocabulary to refer to our soldiers. In the early 90s Senator Patrick Moynihan referred to Americans as a "warrior nation". We also have the "Warrior Games" - a sport created in 2010 for injured servicemen.  A warrior suggests someone who lives for nothing but war. He seeks not peach. If we define ourselves as a nation of warriors, then the logical outcome will be endless wars.

Posted by Ric Couchmam at 11:06:00 PM
Email ThisBlogThis!Share to TwitterShare to FacebookShare to Pinterest