Another Slam Dunk? Another War for Sale? Pu-leeze! 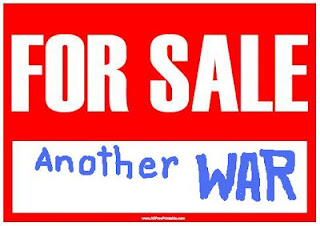 Come on people! Are we going to let our leaders sell us another war? Well here we go again. Looking for a pretext to involve the United States in Syria. Remember the war we bought hook, line, and sinker when a certain Chairman of the Joint Chiefs of Staff sold us that story that got us involved in Iraq? Now, again we are hearing of "credible evidence of multiple attacks using chemical weapons in Syria." Prior to the Iraq war we also had "credible evidence", and we know how that panned out. If as it turned out it wasn't credible back then, what makes it credible the second time around? Are we going to be duped a second time? Arming the rebels in Syria? Possible no-fly zone? All those responses will lead to a greater involvement down the road and to a protracted conflict that will involve the entire region. And can we afford to be getting involved in another war? Especially in view of an economy that seems to be barely straggling along, with long term unemployment still at record levels, and with a middle class seriously foundering. We need to set our priorities right. Mr. President, do not succumb to pressure from critics such as Senator John McCain or former President Bill Clinton to step up U.S. intervention by sending military assistance to the rebels in Syria. Show some leadership, Sir!
Posted by Ric Couchmam at 2:40:00 PM
Email ThisBlogThis!Share to TwitterShare to FacebookShare to Pinterest