My Beard and Technological Singularity 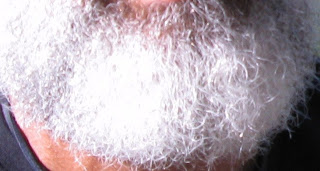 Tuesdays are the days on which I blog about matters relating to science, technology and the environment. So here I was walking along 3rd Avenue in Brooklyn and going over in my mind some of the things I wanted to say about technological singularity - that incredible, mind-boggling exponential advancement in technology to God-knows-where in our future, perhaps resulting in the ultimate atrophying of the human mind (since who would need to use mind anyway, for technology will do all the thinking for you).  As I pondered the possibility of an unfathomable sedentary existence in which ones and zeroes execute functions without the necessity of our limbs or brain, my reverie was abruptly interrupted by an elderly man who asked me for a dollar; I gave him two. As he ambled on his way, a woman standing nearby, and having observed the interaction, said to me, "He is going to spend it on alcohol." I told her that I had done my part and that he was responsible for that which he chose to do with the money. Then suddenly she asked, "How long have you been growing your beard?"  I told her that I had been growing it for several months and then added that some people liked it and some didn't. She looked at me and said, "What!! They don't like it!!! Are you kidding me!!? You are a knockout, honey." And with a huge smile she walked away, while I, taken aback by the unexpected compliment, mouthed a barely audible "Thank you" at her retreating figure. Still slightly taken aback by the exchange, though very much flattered, I could hardly wait to catch a glimpse of my reflection in the show windows of the stores as I walked along the side walk to get that reiteration of her affirmation. I was on a high. Technological singularity would have to wait for next Tuesday.

Posted by Ric Couchmam at 3:59:00 PM
Email ThisBlogThis!Share to TwitterShare to FacebookShare to Pinterest