The Bane of Press Secretaries and Presidents 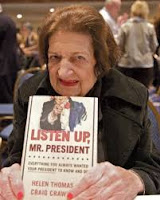 Helen Thomas, a woman journalist who covered the White House since the presidency of John F. Kennedy, passed away four days ago. While her peers cowered or were starry-eyed in the presence of the Presidents, she spoke her mind and was undaunted in her questions which called them to account. Ms. Thomas will certainly be missed. Here are some of her questions:

To President George H.W. Bush
When the president announced that the defense budget would remain the same after the collapse of the Soviet Union, she asked, "Who is the enemy?"

To President Bill Clinton
"There is a wide-spread perception that we really don't have a definable, resolute foreign policy, that it is ad-hoc, crisis to crisis, village to village. Is that true?"

To President George W. Bush
"I'd like to ask you, Mr. President. Your decision to invade Iraq has caused the deaths of thousands of Americans and Iraqis...Every reason given, publicly at least, has turned out not to be true. My question is, why did you really want to go to war?"

To President Barack Obama
"Do you know of any country in the Middle East that has nuclear weapons?"

"Mr. President, when are you going to get out of Afghanistan? Why are you continuing to kill and die there? What is the real excuse? And don't give me this Bushism, 'If we don't go there, they'll all come here.'

To Press Secretary Robert Gibbs on Israel
"The initial reaction to the flotilla massacre, deliberate massacre, an international crime, was pitiful. What do you mean you regret something that should be so strongly condemned? If any other nation in the world had done it, we would have been up in arms."

Posted by Ric Couchmam at 6:09:00 PM
Email ThisBlogThis!Share to TwitterShare to FacebookShare to Pinterest