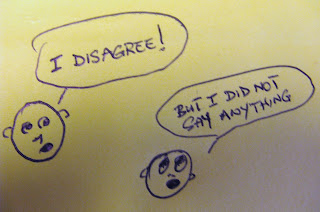 "I disagree."  This is a statement I have heard quite often during classrom discussions, as well as in discussions outside the classroom.  As students engage in discussion in the class, an observer would notice various raised hands as any given student is speaking. Raised hands while someone else has the floor would suggest that those whose hands are raised are busy constructing their own thoughts in their minds rather than listening closely to that which is being said by the current speaker.  It appears that those who are engaged in discourse rarely give careful thought to that which each other is saying and appear always ready to disagree. Whenever a student declares her disagreement with the viewpoint of another student, I would ask that student to first summarize that student's argument before advancing her critique.  The response often shows that the student was not listening effectively to her peer.  The starting point in critical thinking has to be a clear understanding of the argument or proposition that is proffered, and in an oral discourse that presupposes careful listening.  So a critical task for teachers as they attempt to teach students to think critically is to teach them by direct instruction, modeling, and practice how to listen effectively.  In  my blog next Friday I will offer some pointers on how this can be accomplished.


Posted by Ric Couchmam at 5:48:00 PM
Email ThisBlogThis!Share to TwitterShare to FacebookShare to Pinterest