The "David" I Saw 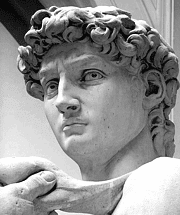 When I told him that I was planning on vacationing in Italy in the summer of 2013, my friend and co-worker, Nick, insisted again and again that I visit Florence's Galleria dell'Accademia to see Michelangelo's David. Well, I did. The minute I set eyes on the piece I was instantly blown away. The statue dominated the room in which it was stationed, eliciting a feeling of awe from all standing in it presence. Once the initial "Wow!" started to wear off, I began my observation of this masterpiece. I circled it several times, trying to see it from all available positions and vantage points. At one point I chuckled to myself and couldn't help thinking that the figure before me was a "grower" and certainly not a "shower". But its phallic endowment or lack thereof aside, I felt that there was something sad about the image before me. The look on his face did not suggest that he felt like a masterpiece. There was a frown there, as if something were troubling him. And why not?  It must be pretty uncomfortable standing in the nude day in and day out for all to see. But then again, that is too trite an answer; there is something far more profound behind that troubled look, and I guess for all our speculation we will never know its source. Taking one final look as I walked away (reminds me of Lot's wife as she looked back on burning Sodom), I noticed that his right hand was unusually large and that his neck was unusually long. Perfection out the window I guess. So I fulfilled my task. I saw Michelangelo's David and am ready to report to Nick. But the David I really wanted to see was Donatello's. More on that masterpiece in next blog on the Arts.


Posted by Ric Couchmam at 11:22:00 AM
Email ThisBlogThis!Share to TwitterShare to FacebookShare to Pinterest