The Other "David" I Saw 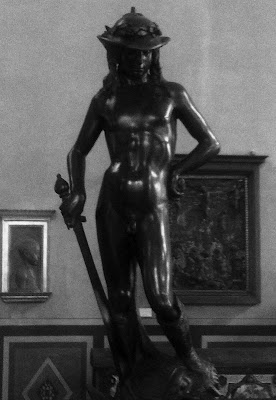 And then there was the other "David" - Donatello's "David", my favorite "David", the one that I really wanted to see.  The one located at the Museo Nazionale del Bargello in Florence.  It is certainly not as imposing, as impressive, and as dominating of the interior as Michelangelo's David. But what it does appear to have more than Michelangelo's is character and mistique.  I call this the black "David" - not a racial designation, but because of the actual color of the sculpture. It is made of bronze (never thought of bronze as being black).  This David, unlike its counterpart at the Galleria dell'Accademia with that expression of worry on its face, looks bored. Further, instead of looking all man (or boy), with male perfection and contours of muscles, we find in this sculpture a wonderful convergence of the masculine and the feminine. There is male there alright, but the figure is strikingly effeminate. Now over the past centuries and to this day, scholars have tried to interpret Donatello's intent behind the creation of this piece. Well, they can speculate until they are blue in the face. I don't care what his motivation was; I simply love the piece. I love it's bold, in-your-faceness and its celebration of the delicate, the smooth, the soft, the feminine in the male.

Now stay with me for a bit. I did the same thing I did when I observed Michelangelo's David. I circled clockwise and anti-clockwise, stepped away, trying to observe from all vantage points. But what pleasantly stunned me when I observed Donatello's David was the view from behind and something that is not quite obvious when the sculpture is viewed from in front.  I could not help smiling and saying to myself, "Oh Donatello! You rascal!"  As you know, naked (well, he does have on a hat and a pair of boots) David is standing on the severed, helmeted head of Goliath.  Now one of the plumes (a rather large one at that) from his helmet is running up rather sensually along the inside of David's bare, right thigh, with the tip terminating almost just behind his scrotum. I quickly circled to the front expecting to see a look of pleasure on David's face, but by the time I got there I saw only that bored look.  I do not know if such were Donatello's intent, but the rear view of his "David" certainly smacks of the erotic.

Posted by Ric Couchmam at 2:59:00 PM
Email ThisBlogThis!Share to TwitterShare to FacebookShare to Pinterest