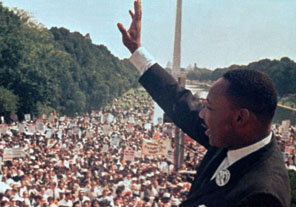 Today, during the "Let Freedom Ring" ceremony at the Lincoln Memorial to commemorate the 50th Anniversary of the March on Washington the wrong man gave the keynote address. The honor of delivering that speech should have be given to someone who embodies that which the Honorable Dr. Martin Luther King, Jr. stood and fought for. The man who delivered the speech today stands in stark contrast.  Firmly committed to the principle of non-violence, Dr. King warned and spoke against a ruthless imperialism, a rapacious capitalism, and a reckless militarism.  The man who gave today's speech at the Linclon Memorial is anything but non-violent in his policies and vigorously supports the three isms above. The speech that was given today was filled with abstractions and amorphous platitudes, presented with oratorical skill and suave but far short on substance and void of any true connection with justice.  When Dr. King gave his "I Have a Dream" speech fifty years ago, it was backed up with personal sacrifice and the personal fight for justice.  Today's speaker gave his speech in the context of his continued use of drones strikes which have killed civilians, his undying support for Wall Street, his setting in place an apparatus for spying on U.S. citizens, and the possibility of his launching cruise missiles against Syria.  All this completely antithetical to that which Dr. Martin Luther King, Jr. fought for.
Posted by Ric Couchmam at 6:46:00 PM
Email ThisBlogThis!Share to TwitterShare to FacebookShare to Pinterest