A Blow to the Warmongers 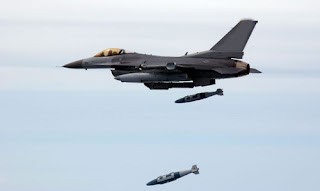 Thank goodness!!!  Cooler heads seem to be prevailing.  The British people unanimously said no to their country's potential involvement in a ridiculous war, the French people are growing increasingly in opposition to it, the American people are beginning to come awake and are growing in opposition to it as well, and Russia is showing some leadership. And our hell-bent-on-war President, chagrined by this surge in opposition, is now trying to take credit for Russia's initiative.  Before this, the Obama regime offered no hope for dialogue or diplomacy with Assad.  The message they were giving us was that a recalcitrant Assad would not cooperate with any offered initiative, hence the need to bomb them into submission.  Well, the Assad regime is showing that it is more than willing to cooperate vis a vis handing over its stockpile of chemical weapons, thanks to Russia's astute diplomatic engagement with Syria.  What is more is that Obama continues to present spurious arguments for bombing Syria, and the absurdity of absurdities is that by going to war with Syria Obama would be inadvertently supporting Al-Qaida.  The stronger rebel groups fighting against the Assad regime in Syria are connected with Al-Qaida.  Say what!!?  After what they did on 9/11??  How ludicrous is that!!?!

Posted by Ric Couchmam at 2:15:00 PM
Email ThisBlogThis!Share to TwitterShare to FacebookShare to Pinterest