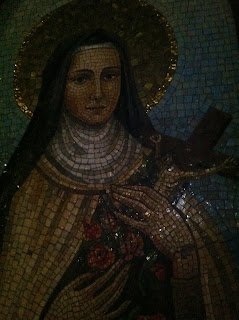 I prayed to Mary (yea, the Virgin Mary) the other day.  "Hail Mary full of grace The Lord is with thee..."  It felt really good.  Used to be my favorite prayer as a kid.  In fact, I feel I can relate to her more.  After all, being a mother, she will definitely be more understanding.  Plus, God can sometimes feel so freaking distant.  I also asked my mom and dad to keep an eye on me.  Aha!  I am getting stares from some of my brethren.

Overheard a conversation about the "Godhead" and what it might mean.  Who gives a "French word!"  The reality is, no-one knows.  What is more is that people have been bitterly persecuted for believing this silly stuff one way or the other.  I could care less whether God were one, or three, or twenty.  The world is "going to hell in a handbasket", and we are discussing trivialities!!? Also overheard a discussion (involving several of my evangelical peers) about whether "homosexuals" will go to Heaven.  Un-be-fricking-lievable!!

You know what is interesting?  When I was growing up my childhood friends were Muslim, Hindu, Catholic, Judaic, Protestant, wayside, etc.  I cannot recall our ever discussing boring religious stuff.  All we wanted to do was play.

And by the way, I prefer to go to Church service on a weekday rather than on a Sunday (or Saturday).  Can't remember the last time I went to Church on a Sunday anyway.  Oops!  I lie.  I attended a service on a Sunday in late July.  I want to go to Church (or to the 'building' as my dear and respected friend, Austin, would say) on my terms.  Let's be real.  After working hard all day during the week, I want to sleep on Saturday and Sunday, have a great brunch, and do something fun later.  Tuesday evenings for 'religious' gathering works fine for me.

Posted by Ric Couchmam at 4:05:00 PM
Email ThisBlogThis!Share to TwitterShare to FacebookShare to Pinterest