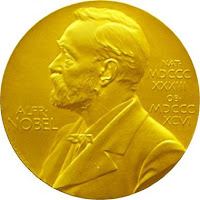 Mr. President, since the electronic communication of people in the U.S. and also in other parts of the world are subject to scrutiny by NSA, I suppose that you will probably become aware of this blog. And since all my blogs, including those of countless others, are under surveillance anyway, I might as well say that which I have to say.  Mr. Obama, I believe you should return the Nobel Peace Prize you received in 2009.  I don't know what the members who made that decision were thinking, but that's another story.  You are not a man of peace, Mr. President; you believe in the necessity of war in dealing with certain violent forces in the world. In your Nobel Prize speech you claimed that you are "a direct consequence" of  the work of Dr. Martin Luther King, Jr., as well as a "living testimony to the moral force of non-violence."  But sadly, you are also (for me at least) a living disappointment.  In most of that speech you sought to justify the use of military force, clearly standing in opposition to the non-violent position of Dr. King.  You gave the defeat of Hitler during World War II as an example of a just war, saying that a non-violent approach (such as Dr. King advocated) would not have stopped Hitler's Army.  But you forget, Mr. President, that Dr. King's non-violent approach as used by the Civil Rights Movement in America significantly derailed its racist policies and practices on behalf of millions of people here in the United States and also made a huge impact around the world both then and now.  World War II did not bring an end to violence; it created the framework for even more violence in the future.  Its legacy include numerous subsequent wars, nuclear weapons proliferation, the Cold War, and a West European/American hegemony, among others.

Dr. King rightly said that violence never brings peace, solves no problems, but merely create new and more complicated problems.  You, sir, by resorting to violence as a response to some of the world's problems are yourself caught up in the cycle of violence and are definitely pulling others into that cycle.  I am a teacher at a private high school in New York City (You, no doubt, know that already.), and from time to time a student might get involved in physical conflict with another student.  What we say to our students, as I am sure all other schools do, is that threats of physical violence, initiating physical violence, and retaliating with physical violence are all unacceptable.  What am I to say to my students when we have a President who seems ready to consistently will that using physical force to retaliate against physical force be a universal law?  As Dr. King said, this is not a choice between non-violence and violence.  So forget all that talk about the so-called "just war" (an obvious oxymoron).  We are talking about the choice between non-violence and non-existence, as he said.  If you pursue war as a choice, Mr. President, then you, along with all others who choose that approach are messing with human existence as a whole.

Posted by Ric Couchmam at 5:30:00 PM
Email ThisBlogThis!Share to TwitterShare to FacebookShare to Pinterest