Bills and Tickets to the Concert or Ball Game 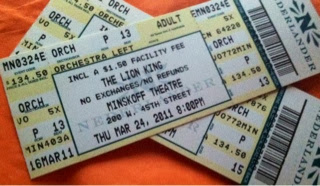 I can't even go to a ball game!!  An Indy or a Nascar race?  Entirely out of the question!  And forget about a Broadway play or musical, or a Madison Square Garden concert, or (You won't believe this!) a movie!  I love spectator sports, love going to concerts and plays, and love going to the movies.  The trouble is I just can't afford it - not these days.  The last time I bought tickets to a ball game was in the mid-nineties to see Michael Jordan's Chicago Bulls vs the New York Knicks at Madison Square Garden. The last time I attended a concert was during that same decade at the same venue to see the Red Hot Chili Peppers in performance.  Apart from the movies, I have not paid to see any sporting or entertainment event since.  Er...well...I did buy tickets for two a few years ago to see the Broadway musical, "The Lion King", but that was because I was trying to "get the girl".  Now I am sure you will agree that given the circumstance, that particular extravagance can be excused.

Earlier this year I inquired about the price of tickets for a soccer game between two top international teams - $90 per ticket!  And the vantage point wasn't even that good!  The tickets for most other sporting events or major performances I have attended were paid for by someone else - usually some executive (from the corporate world) whom I didn't even know personally.  The price of tickets for sporting events and other types of entertainment has sky-rocketed and has continued to do so beyond the point of affordability.  I hope we do not arrive at the place where entertainment, because of its increasing unaffordability, becomes available to only a few - the wealthy and the privileged.  Oh...and by the way...anyone not using his or her season ticket for the next Knicks game??

Posted by Ric Couchmam at 11:12:00 AM
Email ThisBlogThis!Share to TwitterShare to FacebookShare to Pinterest