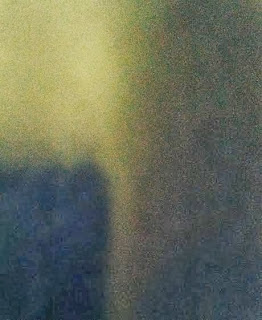 You just can't see it, period!  So apparently there is a kind of "matter" that is unlike the "matter" with which you and I are familiar.  Now, you may recall (as we were taught in school when we were kids) that matter is physical substance that occupies space and possesses mass.   In ordinary, non-technical terms it is the stuff we can see with the naked eye and that we can touch.  What you also probably know (or don't know) is that about 5 percent of our universe is made up of this can-see and can-touch matter.  You are probably saying to yourself, "Woah! Only 5 percent?!"  Yep.  Only 5 percent. What about the other 95 percent, you ask? Well, 75 percent of the rest is what we call "space" (not essentially empty, but that is another story), and the other 25 percent is made up of a type of matter that is quite unlike the matter that you and I know.

The people (cosmologists, astronomers, astro-physicists) who are the experts on this kind of stuff call this 25-percent-matter, "Dark" matter. The reason they call this type of matter "Dark" matter is that it is not visible to the naked eye.  Yea; it is invisible (Insert "grin" here).  Did you just say, "Say what!"?  Okay.  I know what your next question will be. "How do they know it is there even though they cannot see it?"  Although they have never seen this "Dark" matter, they know that it is there because of the behavior of the cosmological bodies around it.  I see you are scratching your head.  I had the same reaction too.  In fact, I thought to myself, "Hell, they have proven a cause from an effect; they have proven the existence of an invisible "matter" from the effect on the surrounding terrestrial bodies."   Theists do the same thing.

Posted by Ric Couchmam at 2:06:00 PM
Email ThisBlogThis!Share to TwitterShare to FacebookShare to Pinterest