The Prophet in the Vatican 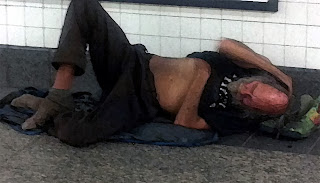 At last!  Some moral leadership! And coming from the most unlikely source - the Vatican.  Yes. The Holy Father, Pope Francis - our modern day John the Baptist, a prophetic voice, the voice of one crying in the wilderness that is this modern world.  I have just finished reading his Apostolic Exhortation, "Evangelii Gaudium", all 84 pages of it.  And what a read it was; I couldn't put it down.  His exhortation represents his dream (brings to mind Dr. King's own dream) of a missionary option - a missionary impulse that transforms everything.  Underlying that impulse is a reform of the Church  - a conversion if you will.  A conversion at all levels, even of the Papacy!

A key focus of Pope Francis' exhortation is the poor.  He describes an indifferent world, deadened by a culture of prosperity, unmoved by the cry of the poor, and incapable of feeling compassion for them.   Receiving strong castigation from him are the economic policies and societal structures that increase the imbalance or widen the gap between the rich and poor and that utterly disregard the dignity of each person, as well as the common good.  He argues for a radical solution to the problem of the poor and an absolute rejection of an unjust socio-economic system and of ideologies that defend the autonomy of the marketplace and financial speculation.

According to the Holy Father, not only are the poor oppressed and exploited, they have been effectively excluded as a result of the evil and injustice embedded in the structures of society.  It is this exclusion that severely underlines the existing inequality - an inequality that is at the root of all social ills.  The logical corollary of this exclusion and inequality, argues Pope Francis, is violence.  As long as exclusion and inequality exist peace cannot be guaranteed and violence will not be eliminated.

The Pope didn't name names; I wish he had.  However, it doesn't take a rocket scientist to figure out some of the institutions, systems, and countries he had in mind, those countries, systems, and institutions that strangle poorer countries and their citizens by debt and accumulation of interest, thus preventing the realization of their economic potential.

Posted by Ric Couchmam at 8:58:00 AM
Email ThisBlogThis!Share to TwitterShare to FacebookShare to Pinterest